Raphaëlle Peria travels through France and across the world in search of trees and horizons to photograph.Using engraving tools (chisel, burin, drill) she incises, scrapes, triturates her prints to escape from the memory image and blur the reality of the landscape photographed. The asceticism of this meticulous work, between appeasement and escape, produces post-photographic works that reveal her transcended memory.

The ocean wave and the hand

Painting, said Picasso, should not imitate nature but work like it. Could the same be true for photography? For cinema?

For Raphaëlle Peria, the snapshot is only the start of the creative process. The cutter, the scraper and the drill work on the photographic film like a scalpel on the skin, to produce the metamorphosis. Underneath the stripped, bleached landscape, another image emerges, like one retouched by memory.

Keeping pace with its subject, Brigitte Barbier's film adopts the process it describes and sets to work in the manner of the artist.

In the image, blurs coexist with sharpness, and the camera's focus toys with switching them around. Through the reflection-induced hollows, or the reliefs produced by abrasion, the filmed surface is a depth to be explored. The shots return, like memories. They are reconstituted. It takes the ocean wave and the hand to be able to see, at last, the artist at work on the beach.

Much like the painter and photographer, the director does not show; she makes visible. The horizon emerges like a line traced by the moving car, and the tree is discernible from the foliage, brought gradually into focus by deceleration. But the disclosure is incomplete; the artist herself is never revealed. She only appears partially, in profile, in an over-the-shoulder shot, or too far away for us to make out her features. Her voice calls up the image, but never stems from it.

By progressing in this fashion, through glimpses and reminders, the film does not explain the work; it builds an understanding of it. The gestures induce the action, and their effects hint at the outcome. The film puts our memory to work, probing it, and the whispering voices that suddenly float like an army of shadows around the unrolled film bring Chris Marker's "La Jetée" to our minds.

The film ends up offering its roll as one gives one's body to science and it is, in turn, worked on by the artist. Scratched by the blade, marked with grooves, the final sequence comes to life, and the white lines proliferate like algae, covering the cliff with white bindweed.

It is no longer the work that gives a motif to the film, but the film that gives its material to the work. What better way to serve its subject?

With an agrégation in philosophy and a PhD in the semiology of texts and images, Sylvie Lopez-Jacob teaches at secondary school, and at the National Superior School of Art of Bourges.
Her long-standing focus has been on bringing the encounter between art and philosophy to fruition. Cinema remains a privileged field of investigation in her lectures and articles.
She has led numerous educational projects centred on questions of aesthetics in collaboration with painters, playwrights and writers including Yves Michaud, Pierre Bergounioux, Claude Viallat and Claude Lévèque...

The Artist
Raphaëlle PERIA was born in 1989 in Amiens.
Visual artist, she lives and works in Paris. 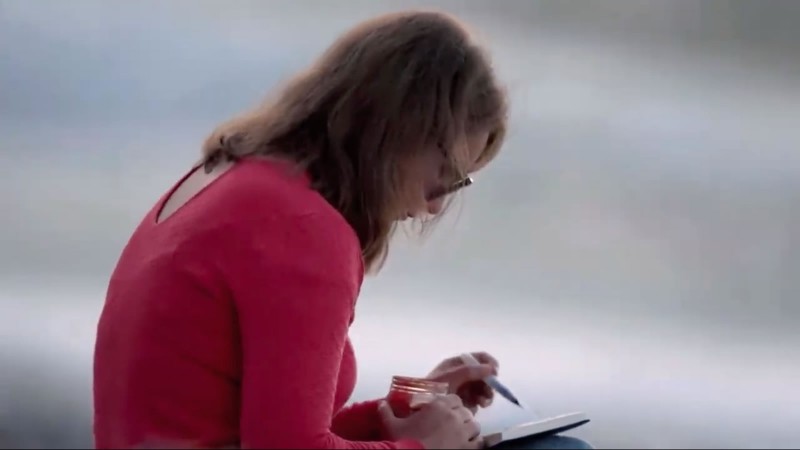