For Wang Du art is not a profession, it is a philosophy, a way of life.
In his studio, between thunderous laughter, tea and the artist's hands at work, Wang Du explains why the world is a work of art of which humans are the co-producers.

Artistic ping-pong
In the wreaths of smoke that rise dancing to the sky, a face appears for an instant then, as in a dream, fades and disappears. Focus on a face whose features, little by little, become apparent. Dark hair. Slanting gaze. The man appears in our field of vision, only to escape us again and again. The stories he tells carry us back to reality, echoing like mantras served in sweet-and-sour sauce. "Art is not a profession," he begins, in his voice with accents of Asia. The scene, interspersed with breaths, punctuated by bursts of laughter and reflections on art, appears to have been filmed at the corner of a table, between friends.
You could imagine yourself in an opium den in the red light district of Shanghai or at the bottom of a hold, in a Chinese junk drifting on the Yangtze.
But we're in the Wang Du workshop, near Paris, and the only thing we’re doing is drinking tea.
And yet, we don't understand everything. As if under ether, drifting in a half-sleep, we pick up bits of conversation: "The world is a work of art". "You have to adopt positions of survival". "The planet isn't sick, it's the people..." ...so many truths that bring us back to reality… Thoughts flow. We put the world to rights over a cup of Lapsang Souchong. Unceremoniously and yet with formality, the Chinese artist Wang Du attempts to answer a simple question: "What is an artist?”. To which, the film "A man... Liberal profession", sketches a fragmented answer.
Behind the camera, Alberto Crespo films the way he breathes. Sounds resonate, the image slows down or speeds up, goes from black and white to colour, travels through the spectrum of blurs, goes back to a detail which evaporates in a cross-fade. Our head is in the clouds, but Wang Du's gestures are precise, assured. The camera, meanwhile, leaves us free to roam the unusual geographies of the image. Photographer, director, musician, Alberto Crespo has made a film of great freedom with false cobbled-together airs, on a human scale, spontaneous in appearance and yet totally mastered. The sensual rendering of this filmic object is reminiscent of the atmosphere of jazz concerts, his passion.
A dialogue develops between the director and the artist, like a game of ping pong, a friendly encounter where sounds are amplified, and where you spin, examine, stop and set off again... in short, where the play of the artist's hands takes you on a journey. These same hands that look as though they’re tracing ideograms in the air. We follow their movements, unassuming as they pour the tea, until they set to work, model the contours of a planisphere, and finally linger on a series of vanities. Three skulls which, having made the artist sweat, bring us back to the vacuity of human passions. Something to be inspired by.
Anaïd Demir
April 2019
The art critic and exhibition curator Anaïd Demir has collaborated on numerous publications including Le Journal des Arts, Beaux-Arts Magazine, Photo, Le Monde 2 and GQ… as well as on Radio Nova. An author of novels deeply rooted in the art domain such as Le dernier jour de Jean-Michel Basquiat (2010, Ed. Anabet) and Joconde Intime (Éditions Léo Scheer-Laureli, 2011), her upcoming novel, Maison-mère, is currently under preparation and has received the support of the CNL.

The Artist
Wang Du was born in 1956 in Wuhan (China). Visual artist, he settled in France in 1990, he lives and works in Paris. He is represented by the Laurent Godin gallery in Paris.
Director, cinematographer and editor
Alberto Crespo 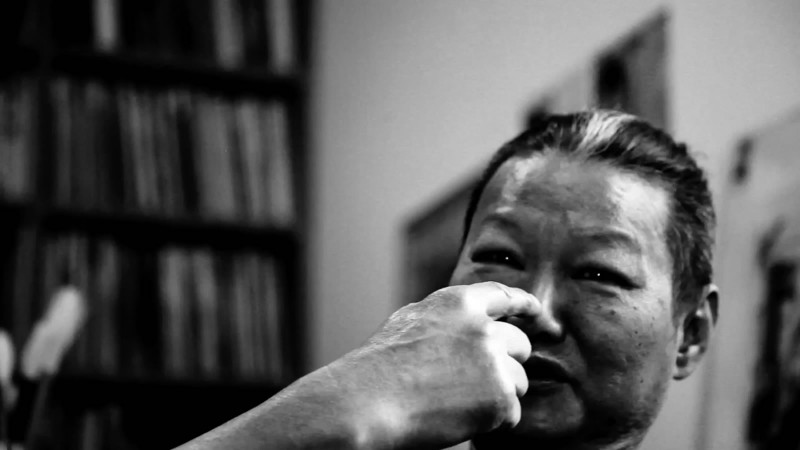